Andy Haste speaks of his clients and his employees as if they were his family—because, to him, they are.

“[At the end of a remodel], I’ll go out and do something we call the exit interview,” Haste says. “People will say ‘I miss such-and- such carpenter so much’ or ‘I miss [Jeff] because they became like family.’ And that’s really nice. You’re in somebody’s house for two or three months or maybe it’s only five weeks, but … they become family to us and those relationships are really important.”

It’s that people-focused approach that has helped Haste build a successful business: Riverside Construction was named to Remodeling’s Big50 in 2013, and this year honored as a finalist for the Fred Case Remodeling Entrepreneur of the Year Award.

Want to join the discussion?
Feel free to contribute!

This site uses Akismet to reduce spam. Learn how your comment data is processed. 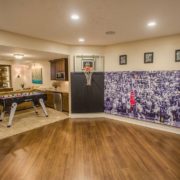 Breathtaking Design Ideas for Your Basement Renovation
Scroll to top